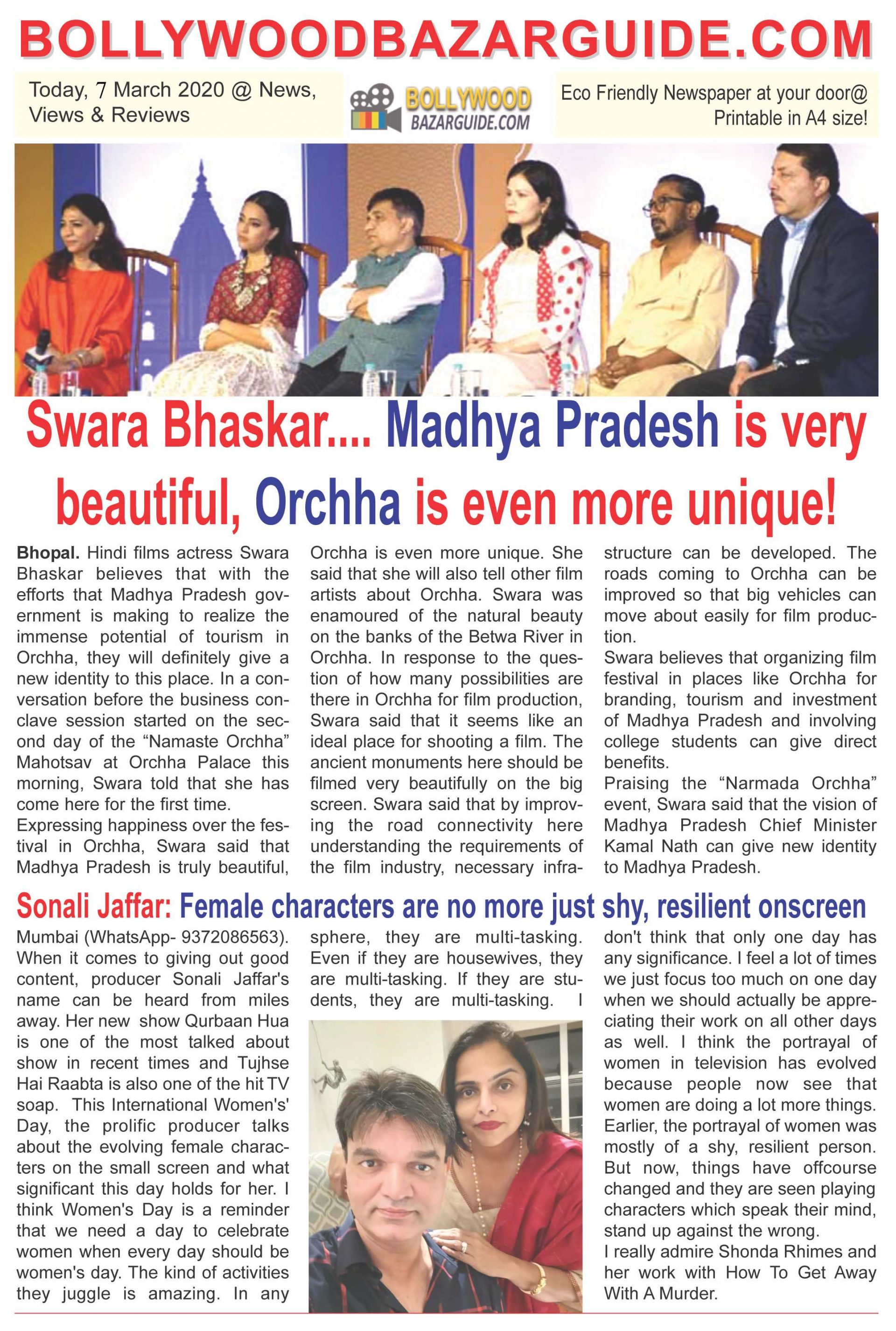 Bhopal. Hindi films actress Swara Bhaskar believes that with the efforts that Madhya Pradesh government is making to realize the immense potential of tourism in Orchha, they will definitely give a new identity to this place. In a conversation before the business conclave session started on the second day of the “Namaste Orchha” Mahotsav at Orchha Palace this morning, Swara told that she has come here for the first time.
Expressing happiness over the festival in Orchha, Swara said that Madhya Pradesh is truly beautiful, Orchha is even more unique. She said that she will also tell other film artists about Orchha. Swara was enamoured of the natural beauty on the banks of the Betwa River in Orchha. In response to the question of how many possibilities are there in Orchha for film production, Swara said that it seems like an ideal place for shooting a film. The ancient monuments here should be filmed very beautifully on the big screen. Swara said that by improving the road connectivity here understanding the requirements of the film industry, necessary infrastructure can be developed. The roads coming to Orchha can be improved so that big vehicles can move about easily for film production.
Swara believes that organizing film festival in places like Orchha for branding, tourism and investment of Madhya Pradesh and involving college students can give direct benefits.
Praising the “Narmada Orchha” event, Swara said that the vision of Madhya Pradesh Chief Minister Kamal Nath can give new identity to Madhya Pradesh.

Mumbai (WhatsApp- 9372086563). When it comes to giving out good content, producer Sonali Jaffar’s name can be heard from miles away. Her new show Qurbaan Hua is one of the most talked about show in recent times and Tujhse Hai Raabta is also one of the hit TV soap. This International Women’s’ Day, the prolific producer talks about the evolving female characters on the small screen and what significant this day holds for her. I think Women’s Day is a reminder that we need a day to celebrate women when every day should be women’s day. The kind of activities they juggle is amazing. In any sphere, they are multi-tasking. Even if they are housewives, they are multi-tasking. If they are students, they are multi-tasking. I don’t think that only one day has any significance. I feel a lot of times we just focus too much on one day when we should actually be appreciating their work on all other days as well. I think the portrayal of women in television has evolved because people now see that women are doing a lot more things. Earlier, the portrayal of women was mostly of a shy, resilient person. But now, things have offcourse changed and they are seen playing characters which speak their mind, stand up against the wrong.
I really admire Shonda Rhimes and her work with How To Get Away With A Murder.