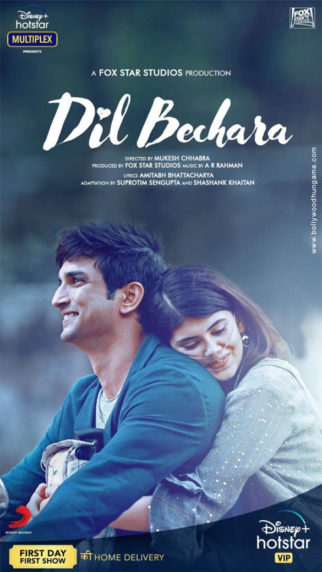 Nation has its powerful emotion stirring since the soul of the young actor Sushant Singh Rajput departed with an unnatural death. While his fans were in deep remorse, the makers of Sushant’s last film Dil Bechara, decided not to extinguish the rage and wave in the public, they decided to release the same on Worlwide OTT Platform Disney plus Hotstar on 24th July 2020. The film is available for all that is for subscribers as well as non-subscribers.

Although there were revolts by a portion of Sushant’s Fans asking for a theatrical release whereas the makers decided to drop the trailer on Monday 6th July 2020.

The trailer received a heart-warming and record breaking response from the audience within 24 hours of its released. It broke the record of Avengers Endgame’s Trailer. The trailer crossed 5 million views within one hour of the release itself. Having views over millions on all the social platforms, the movie looks promising and befitting to be marked up in the calendar.

Sushant Singh Rajput and Sanajana Sanghi starrer Dil Bechara is the official Hindi adaptation of famous Hollywood film Fault In Our Stars, based on the John Green’s bestselling young adult novel labelled under the same name. This also marks the directorial debut of ace casting director of Bollywood Mukesh Chabbra.

Sushant’s last released film gave a message of not giving up on failure and live with acceptance, while in  Dil Bechara his character imparts the lesson of living the life to the fullest. Irony of life, Sushant succumbed to death through suicide. No matter what his films sets right parameters for viewers and thoughtful lessons of good life.

The most awaited trailer of 2.43 seconds possesses the right grip to keep you retained and then leave you wondering at the last.

The actor’s name brings up the storm of emotions, and now the sentimental film release after his demise will leave the audience doubly tearful.

It shows the story of Kizzie(Sanjana), a cancer patient; Manny, a cancer survivor and their emotional ride. While Kizzie has been living her days knowing that it might end any day, due to the disease, but Manny enters her life only to show her some love and ideas to live life without worrying.

Fault In Our Stars was known for its music, Likewise, the Indian makers made their best for Dil Bechara by roping legendary Music Maestro A R Rehman for the tragic Love Story.

The story travels around in the lanes of Bengal and Paris, the frames look appealing.

It looks like Sushant, Sanjana and Mukesh have given their best in the film, but real intensity will be seen on the release of the film.

We believe that Sushant’s last film Dil Bechara should not be reviewed on any grounds for him, rather it should be seen as his last piece of work, paying tribute to his commendable career. Film Enthusiast should watch the film as in pure remembrance of Sushant Singh Rajput.

Hence, In this review we are not making any scoring for the trailer, we urge an appeal to each one of you to see the film Dil Bechara as a film enthusiast rather than being a critic.