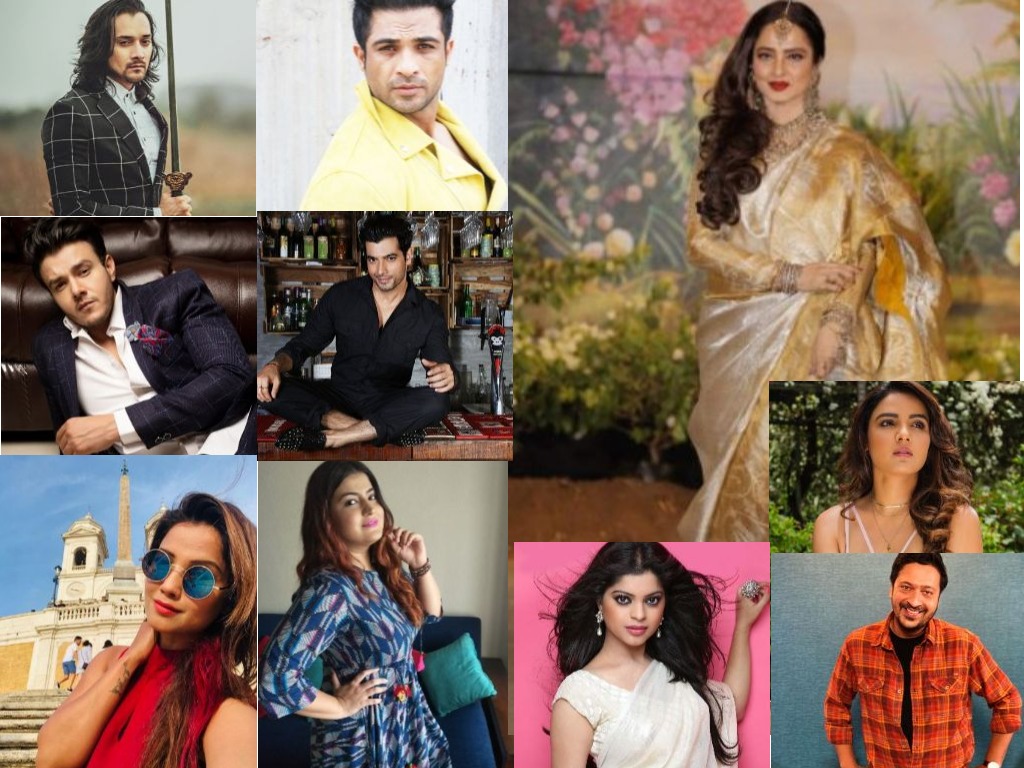 Arun Mandola: My favourite movie is “Biwi ho to Aisi”. She has a tremendous aura, I don’t know how she has maintained that aura. Her acting skills are fabulous and still, she is better than any actress. Some people have a mysterious personality and it is difficult to describe Rakha Ji because of this. All I can say is that she is an inspiration for actors.

Sneha Wagh: Rekha Ji has been this industry’s sweetheart since a very very long time now. We have only seen her looking prettier and classier day by day. I feel she’s the epitome of Indian beauty. One film of Rekha Ji that’s a number one entertainer for me is Khoon Bhari Maang. How can we not be a fan after watching a movie like that? Wonderful acting and lessons on how to be kind and humane.

Sachin Parikh: I have always adored Rekha Ji for her aura, her stunning screen presence and her performances. There are so many films of hers that I have watched and admired. She, at this age of 64, looks as sexy and stunning as she used to look 30 years ago. I wholeheartedly wish Rekha Ji a very Happy Birthday. I loved her performance in Khoon Bhari Maang so much. I recently shot for my 1st web series and there was a scene where my half face is shown burnt. I immediately related this with her look in Khoon Bhari Maang and I dedicate this get up to her on her 65th birthday.

Ssharad Malhotra: Veteran actress Rekha Ji has always been counted as the number one B- Town diva. Her fashion statements can’t be ignored. There are so many films of hers which I have seen umpteen times. But my favourite are “Jhooti”, “Khoobsurat”, “Silsila”. She has an aura which she is carrying for last so many years and that is the reason people want to see more of her and I wish one day I share the screen with her, that will be my dream project.

Adaa Khan: Rekha Ji is one such actress who can still surpass anyone with her charm and beauty at 64. It is often said that beauty lies inside you. Rekha who used to be plump and dusky since the very beginning had to bring about her inner beauty on the outside to match up to the actresses of her times. One of my favourite film of her is “Ijazat”. I can see that film several times and as an actor, I have taken so many things from the film. No doubt she is a diva and the mystery element about her has been always a topic of discussion, which will continue.

Aniruddh Dave: As an artist, I am jealous of Rekha Ji because the various shades of character which she has played on the silver screen which has amazed me. One of my favourite films is Umarao Jaan. One thing which is very striking about her career is that her performances always received a positive response. Her performance in Umrao Jaan is considered to be one of her best. She is undoubtedly the ultimate diva of the Indian film industry and her mysterious aura matches with her personality.

Jasmin Bhasin: Rekha is the ultimate beauty and carries herself perfectly. I loved her in Umrao Jaan. She is class and great personified. We would like to see her in films and many of her films are unforgettable.

Mohammad Nazim: Talk about timeless beauty and veteran actress Rekha Ji’s name will forever be there in the list. From her young age, until now, the actress has aged beautifully and gracefully. Rekha can still give tough competition to many new age actresses. One of my favourite film of Rekha’s is “Ghar”, the way she has portrayed her character in the film is amazing. As an actor, I feel we should all watch her film as textbooks to acting well. Rekha’s mysterious life has been always a discussion among her fans even the film fraternity is very curious about it.

Subuhi Joshi: I am in awe of Rekha Ji, she has had such a troubled life and yet the lady stands, strong as a pillar. I read her biography recently. From molestation on set to getting attacked for her husband’s death, the lady has seen it all. And yet she’s right there, standing by her self like a rock. I respect her for being so brave. Be it an intense movie like “Umrao Jaan” or a crazy comedy like “Biwi Ho To Aisi”, her performance has undoubtedly been par excellence. I’ve even watched her movies like “Super Nani” and “Bachke Rehna Re Baba”, and have always enjoyed her performance but Silsila and Ijazat would be my most favourite Rekha movies.

Angad Hasija: I am available for new work!