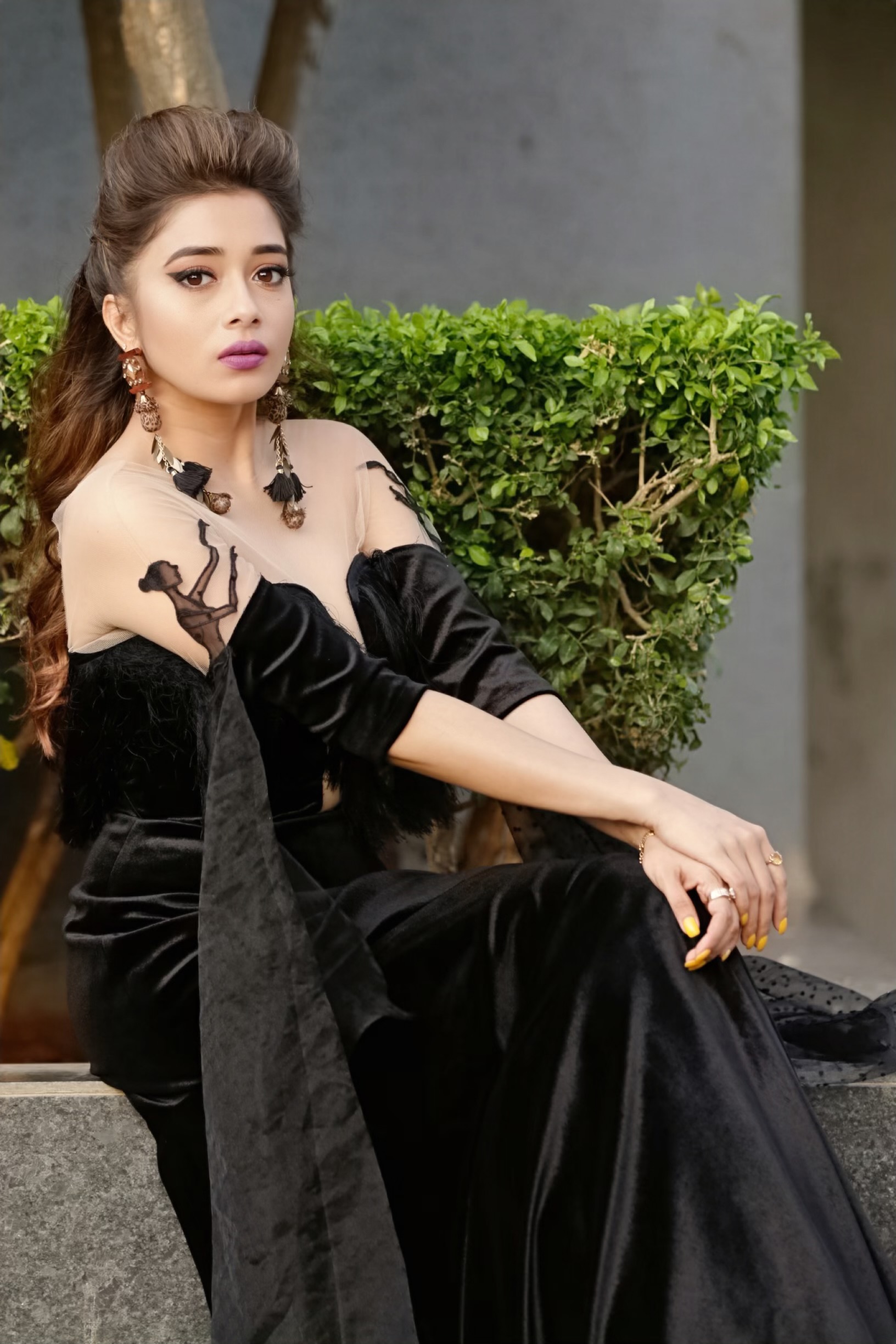 Tinaa Dattaa: Ratta queen is my nickname on the sets of Daayan

Mumbai (WhatsApp- 9372086563) . Actress Tinaa Dattaa, who plays the role of Jahnvi Morya in Daayan is a ‘Ratta’ queen in real life. Working on a rigorous and difficult scene, Tinaa manages to memorize dialogues with the right emotions and expressions.
The gorgeous actress revealed that she has an excellent memory and has a knack for memorizing difficult lines in the first go. It takes her 2 minutes to go through a scene as long as 4 pages and in one single go, the actress is all set to give her best shot. Recently, Tinaa was delivering a scene with her co-actor, wherein the latter forgot his dialogues and Tinaa prompted him his lines to help him complete the scene.

On asking her, how she manages to memorize every word of her line without using a prompter, Tinaa said, “I have a knack for memorizing difficult lines like a pro irrespective of how long and elaborate they might be. I can memorize my lines by reading the scene just once, and that usually doesn’t take me more than 2 minutes. I don’t re-read my scene after that. Ratta queen is my nickname on the set for this very reason! I have never believed in remembering my lines word to word. Once the content depicted in the lines is clear in my mind, I improvise here and there and frame them in the best manner I can. This is where the screenplay comes in handy as it helps an actor get a grip of the character and a flow of the scene as per the best. I tend to intensely focus on reading that.”
Adding further about some of the best co-stars the actress has worked with, Tinaa said, “I really enjoyed working with Hiten Tejwani, Aashka Goradia, and Vicky Ahuja while shooting for Daayan. They have a knack to improvise effortlessly as well, delivering a scene with them is never a challenge. We honestly do not get a lot of time to prepare ourselves especially since we are working day and night shifts for episodes. I believe developing an ability as such really helps an actor grow.”
On the work front, Tinaa gained popularity with her role as Icchha in Uttaran and audiences loved her exceptional performance.

Mumbai. Popular actress Tinaa Dattaa  recently went to Armenia where her show Uttaran is a big hit and the people over there are crazy over Ichha. She has got unadulterated love and blessings from the people there. Speaking about her overall experience Tinaa says,”i feel blessed to receive so much love. I was so touched this time in Armenia that it made me realise what i have earned in life.  I believe am the richest person because am blessed with pure love.Everthing fades away-but this love always remains. It also makes me wonder that all over the world how much people love me. How much they care for me.”
Tina had so many life changing experiences in Armenia but few are definitely special. She met an 84 year old lady who couldn’t walk or  even stand properly. But she was in love with Ichcha. She started crying when she saw Tinaa and just kept giving pecks on her cheeks and saying I love you.. god bless u.. wish u all the happiness. And then she met a special child who couldn’t even stand and yet had zest for life. He was extremely happy to meet Tinaa and when he saw her he had a twinkle in his eyes. Tinaa also met an old man who requested her not to cry as seeing her crying he also cries. Tinaa feels these moments are her priceless possessions in life. She adds,”Uttaran has a new meaning for me after experiencing the unconditional love from fans in Armenia. Such adulation has touched my heart. I felt so rich with love, emotions and blessings. The impact of being an actress has left me speechless and love from all over the world has rejunevated me and I have to live up to the expectations of my fans. I am truly blessed and grateful to life and career! Armenia I love you and will be ever grateful for all this.”

Tinaa Dattaa- When I started counting my blessings, I realized I have everything I could ever need!

*Fans make you who you are, say TV actor

Tinaa Dattaa : Fans are the most important part of an actor’s life. We are here because of our fans. Fans give us all that love and make us a star. So, I feel they are really important to me and I love all my fans a lot. One fan sent me 10 red roses for 10 days and on the 10th day, he sent a letter written in blood.

Tinaa Dattaa- No matter how colourful your life maybe, you should be strong enough to protect it from getting faded.

Trust actor Tinaa Dattaa to come up with the most stylish ensembles every time she steps out. Her appearance at Baba Siddiqui’s Iftaar party was very fashionable. The actor wore a light teal ethnic jumpsuit and we can’t stop admiring the detailing.

Be it her traditional attires or western ensembles, Tinaa has always been a source of style inspiration. But this time she has clearly outdone herself!

Samir Onkar has a family birthday….

Rahul Jain’s back to give us goosebumps with sad version of Bepannah title after winning our hearts with the rock...